The first seaweed of the season (hatsu-tsumi nori) is a delicacy from the moutains and sea that can only be enjoyed in winter. I was curious about them every time I viewed the sea from Takamatsu Port, saw them on the ferry and stared down at them from the observation deck of the island. What are those square things offshore? “They are rafts for aquafarming, used for farming nori.” This is what a fisherman explained while I was walking in town where the rafts could be seen on the other side of the breakwater. Nori is an essential ingredient in Japanese dishes, such as sushi and rice balls. With high nutritional value, nori is also called “vegetable of the sea” or “soy bean of the sea.” Due in part to the addition of washoku (traditional food culture of Japan) to UNESCO’s Intangible Cultural Heritage list in 2013, nori became known in other countries as healthy food. 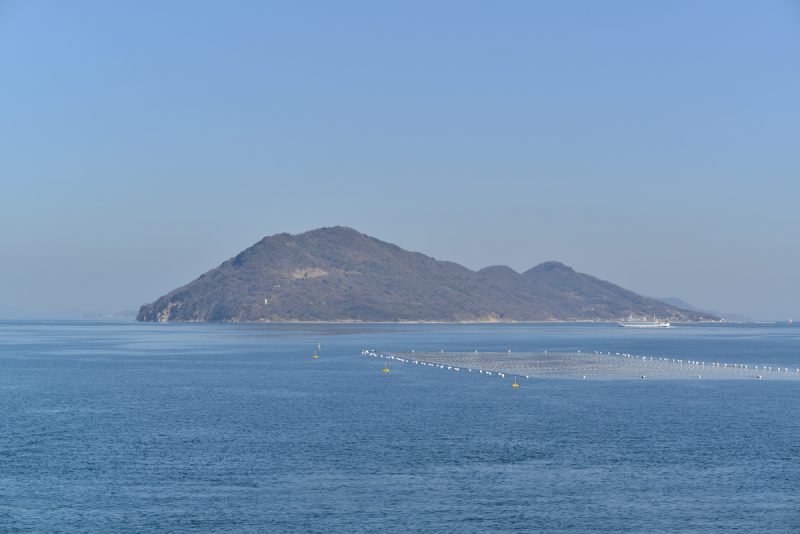 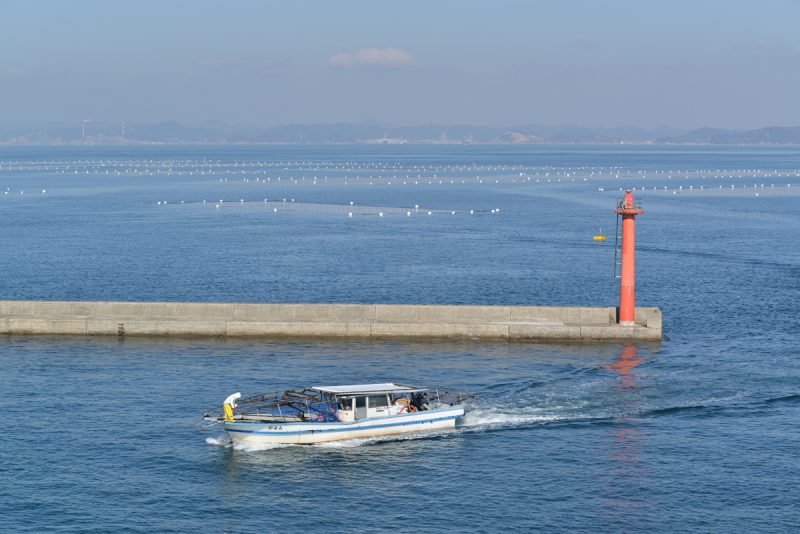 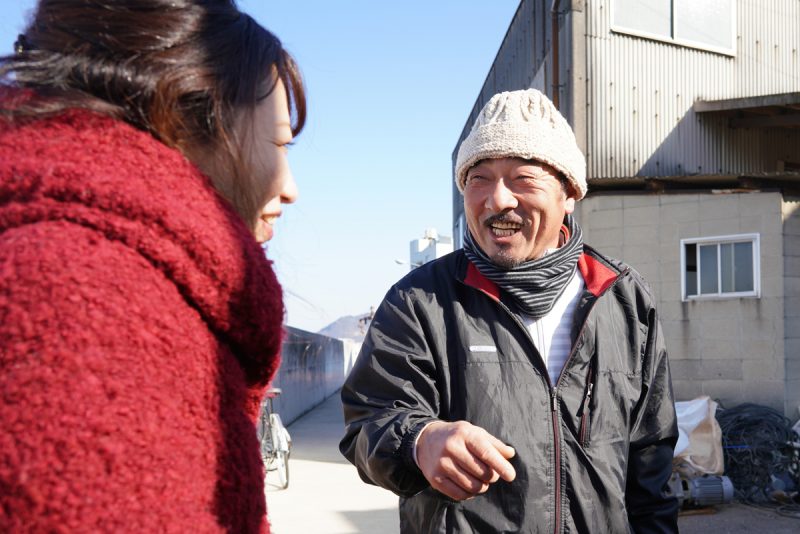 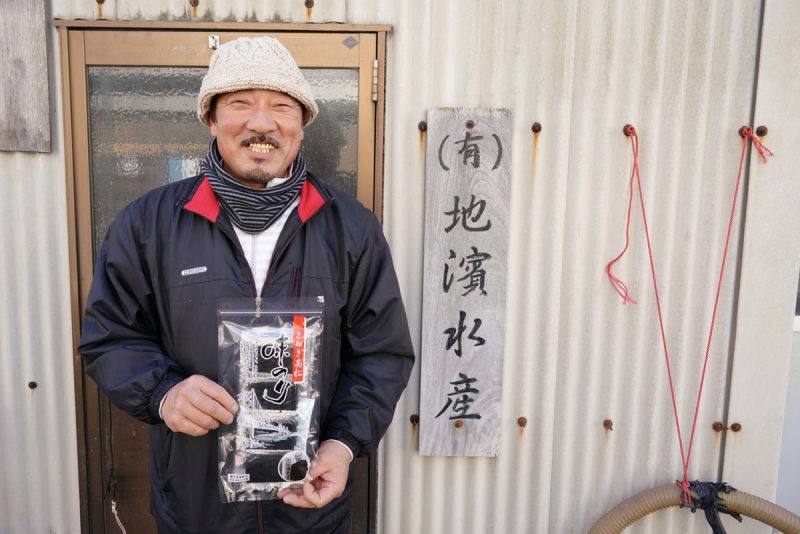 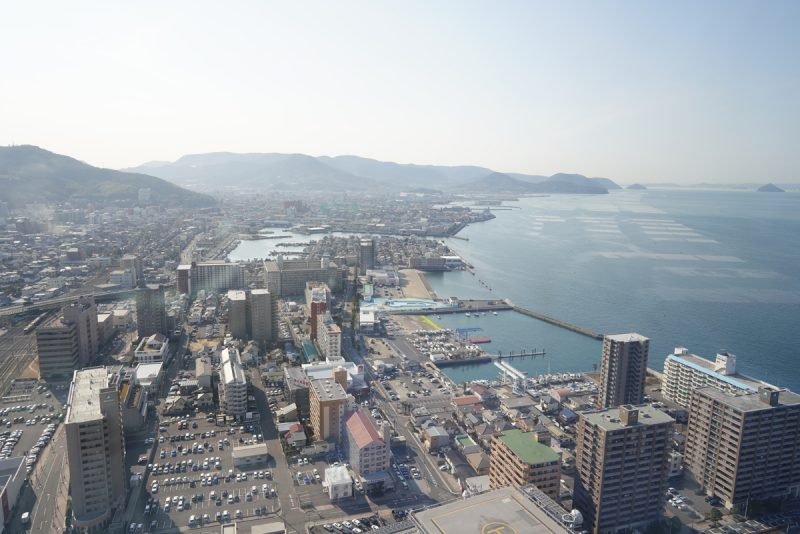 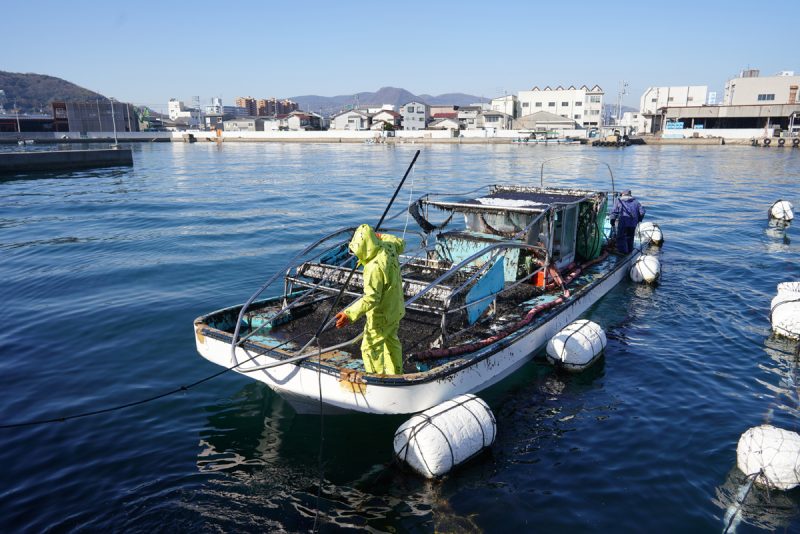 I had the impression that nori was produced in quiet areas, such as fishing villages, or on islands richly endowed with nature. I was surprised to learn that it is produced in the sea off the coast of Takamatsu! I did research and found that Kagawa is ranked 5th in Japan based on volume of aquaculture-produced nori (in 2015)! Among cities and towns in Kagawa, Takamatsu City is ranked first in production volume (in 2014). Nori is undeniably a local specialty of Takamatsu, isn’t it? I want to try it!

Above all, hatsu-tsumi nori, or the first nori of the harvest season, which is winter, is a rare product—less than 10%. They say that the taste of hatsu-tsumi nori is much better than nori picked later in the season. I am desperate to try it! In the meantime, a boat loaded with black nori returned to the port.

Let me explain how nori is picked. The raft is raised from the sea and the entire boat goes under it to pick nori. A boat featuring a robust structure, nicknamed moguri-bune (crawling boat), is very effective.

Both the boat and fishermen that have returned from the early morning work look as though they had broken through the front line. Around the port are eight houses of fishermen who are engaged in nori farming. One allowed me to observe the production process.

I interviewed Mr. Hideo Chihama from Chihama Suisan. He is a fisherman from a family that has been farming nori in Takamatsu since his uncle’s and father’s generation.

Nori is harvested during the three months of winter. After seeding in the autumn, the nori harvest begins in December. When the buds grow after the first picking, it is time for the second picking. When they grow again, the third picking begins. The later nori is picked, the harder it is. The highest-grade nori appears glossy and greenish black when it is finished as a full-size sheet. The growth of nori is influenced by the conditions of the sea. They say to stop harvesting it in one month in a season when its color does not become proper.

Now, nori sucked up from the boat is brought to the processing factory through a large pipe. To become a product with proper flavoring, the harvested nori needs to be processed while it is fresh. First, they spend one day carefully washing the seaweed to remove dirt. On the day after landing, tiny foreign particles are removed. Soon it will be finished.Experience Takamatsu 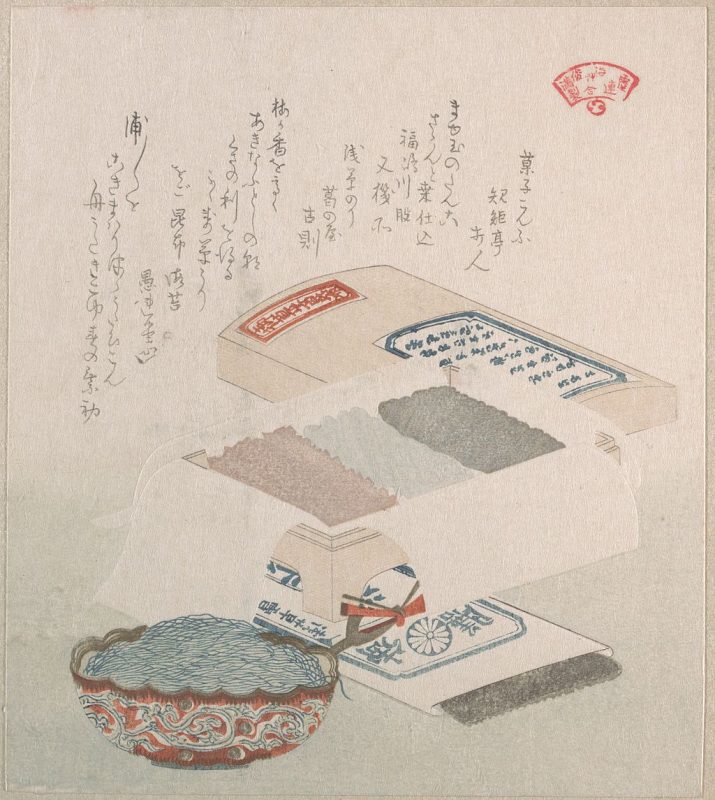 Cakes and Food Made of Seaweed by Kubo Shunman, 19th century 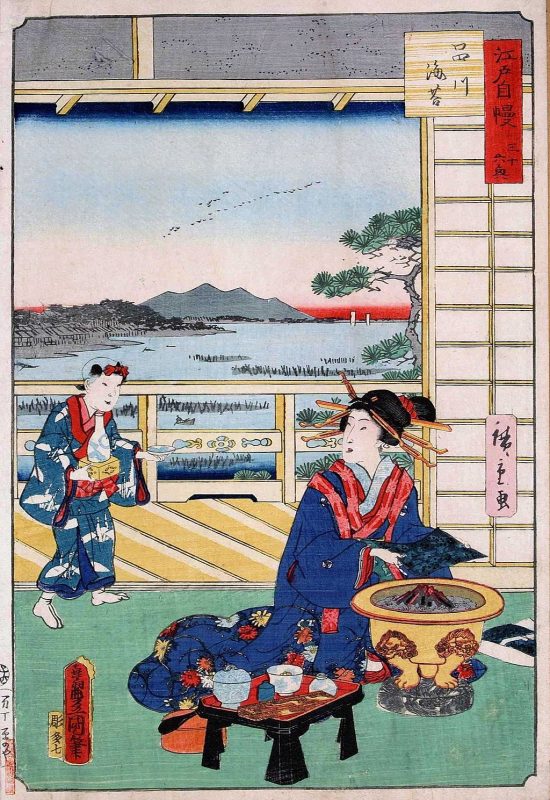 Nori is the Japanese name for edible seaweed species and it’s a specialty of Kagawa pref., Japan. It is used chiefly as an ingredient (wrap) of sushi. Finished products are made by a shredding and rack-drying process that resembles papermaking. Production and processing of nori is an advanced form of agriculture. Farming takes place in the sea where the Pyropia plants grow attached to nets suspended at the sea surface and where the farmers operate from boats. The plants grow rapidly, requiring about 45 days from “seeding” until the first harvest. In Japan, over 600 square km of coastal waters are given to producing 350,000 tonnes (340,000 long tons).(Wikipedia)