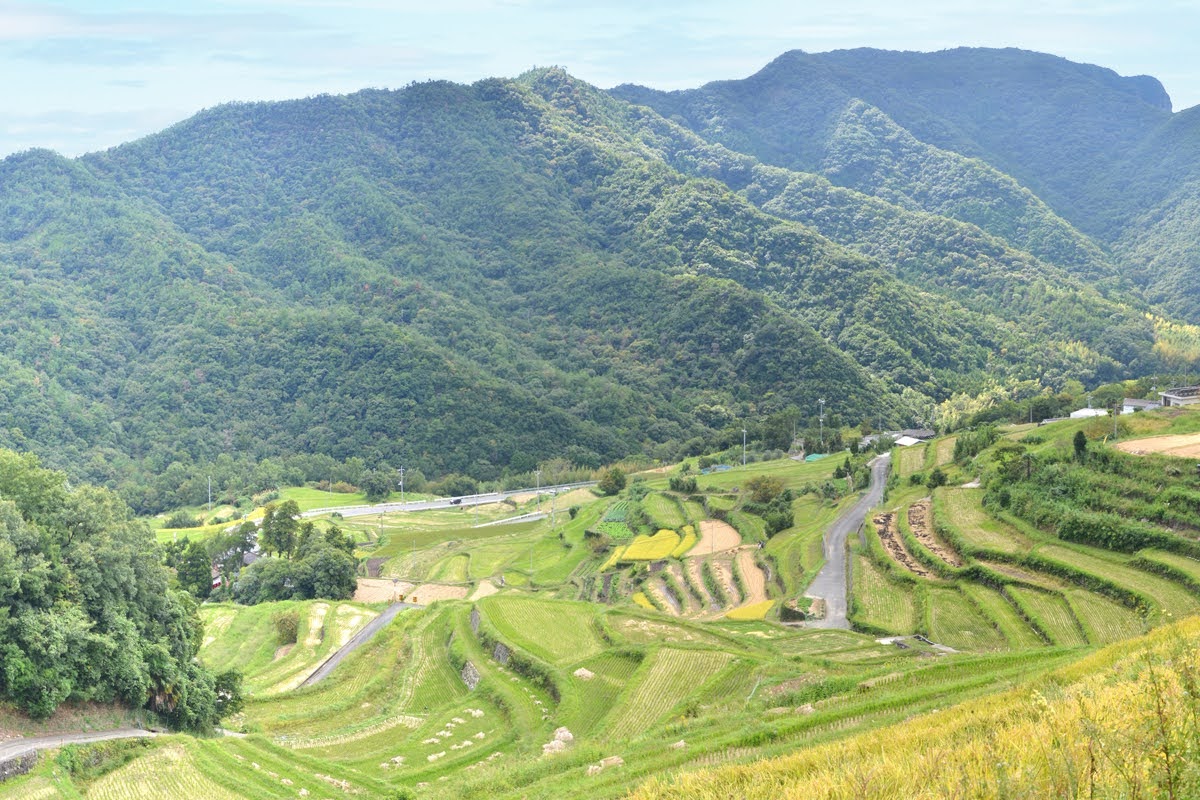 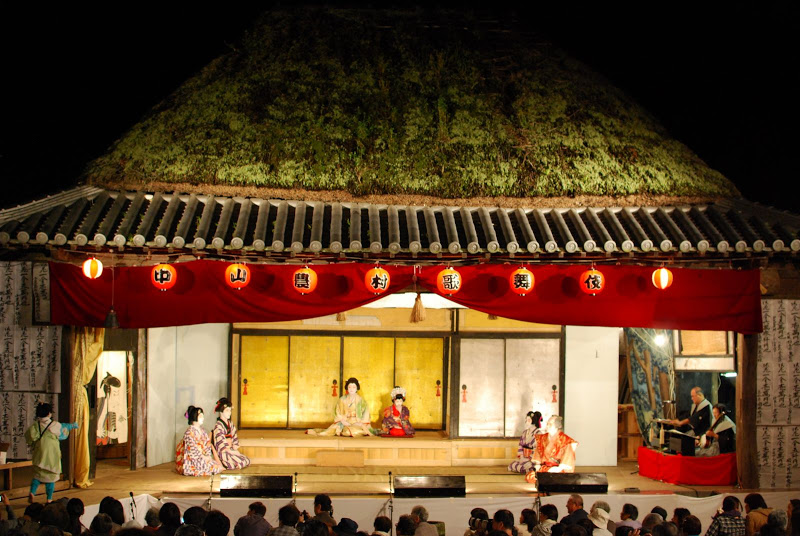 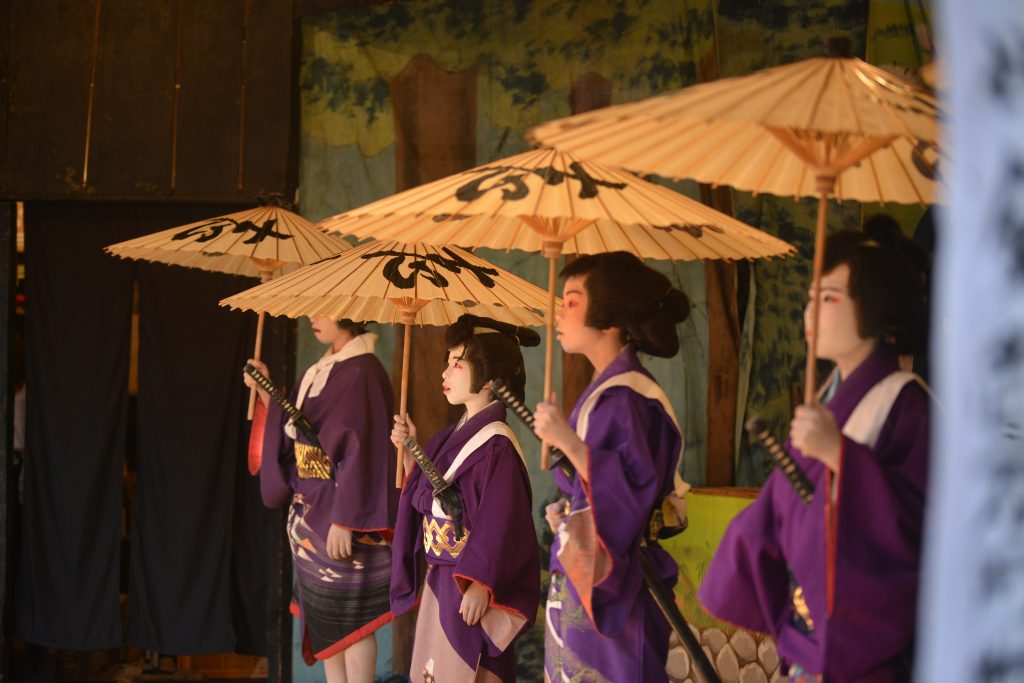 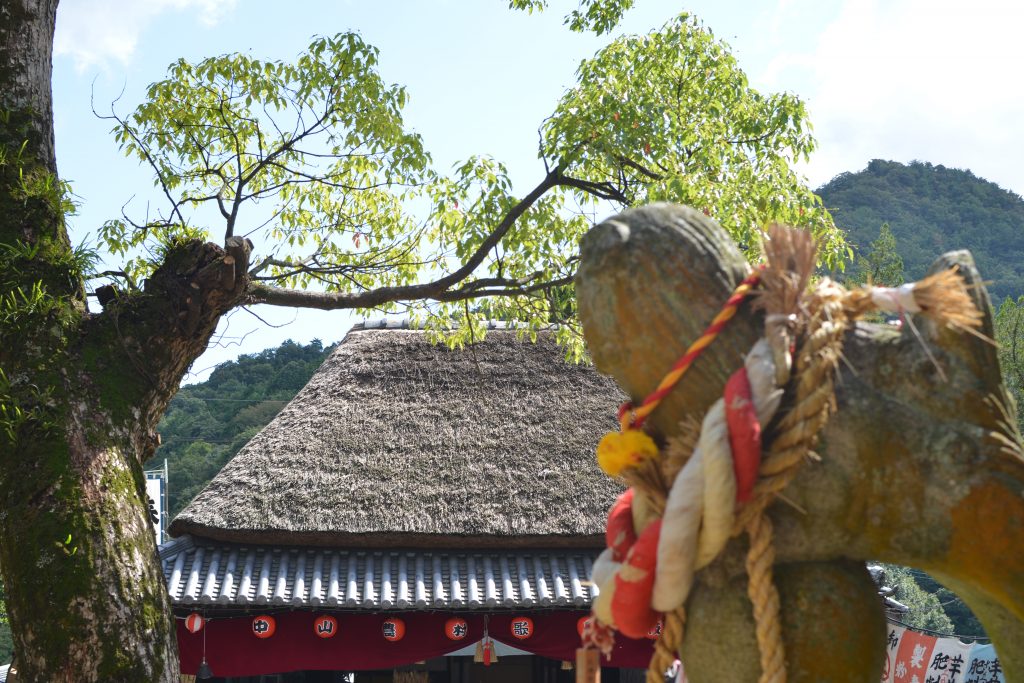 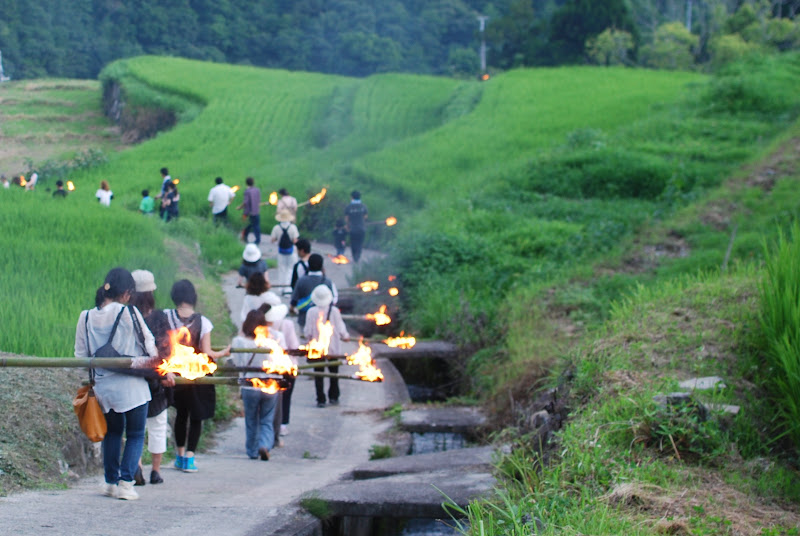 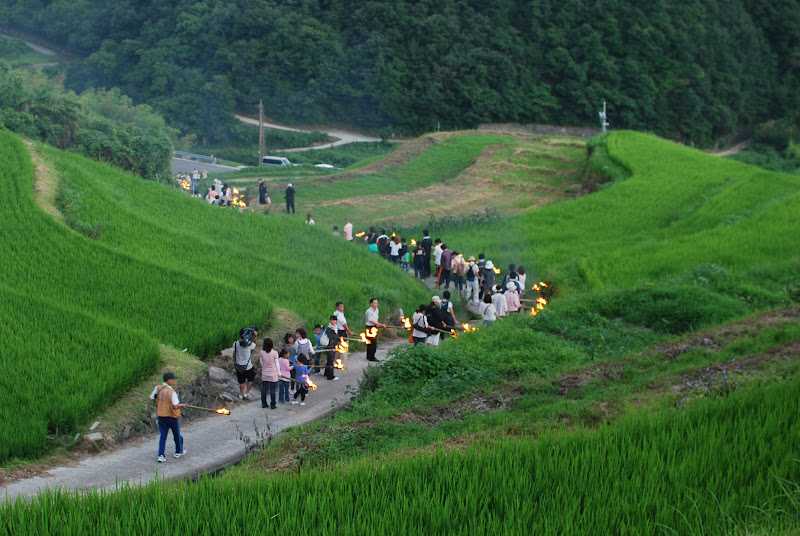 Issues faced
The Nakayama area, located in the middle of a mountainous area in Shodoshima Island, has been selected as one of the “100 Best Rice Terraces in Japan”. The site is surrounded by deep mountains, beautiful clear streams where fireflies dance in early summer and scattered houses throughout the area. Since the original scenery of Japan still remains, it is considered as one of the “100 Most Beautiful Historic Villages in Japan” and “100 Selections of Japanese Villages”. In Nakayama, the local rice cultivation is not only meant to balance the ecosystem, manage water flow and preserve the landscape, but also it is an axis of local culture where traditions such as the “Nakayama Rural Kabuki” (*1) and “Mushi Okuri” (*2) are still present. Unfortunately, in the 1970s, due to the low labor productivity of the Terraced Rice Fields, many farmers left, leaving the region with a serious aging and declining population problem. This situation affected vastly the rice terraces, which were abandoned. In fact, in 2012, the number of terraced rice fields managed by cultivation decreased from 758 to 435. The increase in the number of dilapidated rice fields covered with plants and trees has damaged the Satoyama (Japanese Rural landscape), reduced the water circulation function and further deteriorated the effectiveness of agricultural work. In addition to this, the problem of depopulation also affected the transmission of the Nakayama Rural Kabuki, a 300-year-old traditional local performing art and the Mushi Okuri event fell into oblivion, putting at risk its survival. The landscape and traditional events of the Nakayama area have a high value for tourism and are one of the town’s most valuable tourist resources that have attracted many visitors. The issue was, however, whether it would be possible to continue to protect the Nakayama Senmaida rice field, which is the source of this activity.

(*1) “Nakayama Rural Kabuki” This traditional performing art has been handed from generation to generation since the middle of the Edo period (about 300 years ago). As a tribute for a good harvest, it is performed by the local people including the actors and the backstage staff.

(*2) “Mushi Okuri” This is also a traditional event like the Nakayama Rural Kabuki, which has been passed down since the middle of the Edo period (about 300 years ago). This event is held on the 11th day counting from the summer solstice, known as Hangesho in the area (normally in the beginning of July). The participants march in a procession through a trail between terraced rice paddies with torches called “Hote” and hoping to have a good harvest by avoiding pest damages.

Key success factors
There were two events that motivated the local people to take part in the preservation activities of the terraced rice fields. The first was the Setouchi International Art Festival, which took place in 2010 and 2013. This was a contemporary art festival held once every three years on the islands of the Seto Inland Sea and attracted around 110,000 visitors in 2010 and 200,000 in 2013 to Shodoshima. Among them, one of the most popular artworks in the Shodoshima area was a dome-shaped work made from thousands of bamboo sticks by Taiwanese artist Wang Wen-Chih, which was exhibited in the Nakayama area and attracted many visitors. Secondly, it was the location for the film “Rebirth” (Yōkame no Semi), which was released in 2011 and won 10 Japanese Academy Awards. The key shooting scene in the movie was accompanied by a reenactment of the “Mushi-Okuri” ceremony in the Nakayama Senmaida rice field. It was an opportunity for the local people to revive a tradition event that had been long lost. In this way, the Nakayama area gained more attention as a tourist destination and the local people were able to recognize the charm of their own region.

Lessons learned
Recognized both domestically and internationally as a location for the Setouchi International Art Festival and movies, both local residents and the Shodoshima Nakayama Terraced Rice Field Council have been actively involved in preservation activities. However, the increase in the number of tourists brought other inconveniences, such as occurrences of visitors entering the terraced rice fields on private property and parking on the road due to unclear parking areas. In order to solve this problem, the town paved the parking areas, installed signs to guide visitors to the parking areas, and put-up signs to warn visitors not to enter the rice paddies and footpaths. In this way, a certain level of mutual consideration has grown between the lives of the local residents and tourism, making it possible to preserve the local landscape and culture while maintaining the bustle of tourism.

Results, achievements and recognitions
As a result of public-private sector conservation efforts led by the Shodoshima Town Terraced Rice Fields Council, 44 rice fields were restored by 2020, and with the combined efforts of the local water irrigation association and others who have mowed the fallow fields twice a year to preserve the landscape, 68 degraded fields have been eliminated. In addition, the “Mushi-Okuri” event that had once ceased to exist, was reestablished after success during the filming of a movie in 2011, and has become a summer tradition in Shodoshima, attended by not only local residents but also by many tourists. The Shodoshima Town Terraced Rice Fields Council was awarded by the Agricultural and Rural Development Project Public Relations the Grand Prize in 2014 in recognition of its extensive publicity activities regarding the preservation of the terraced rice fields and other local attractions such as traditional events and the Setouchi Triennale International Art Festival exhibits. Since 2017, in collaboration with a local sake brewery company, Shodoshima Sake has been produced and sold made from sake rice cultivated in the Nakayama Senmaida rice field. The rice from this area is also used as a return gift for Shodoshima’s hometown tax donation program. The promotion of the Nakayama Senmaida rice field both domestically and internationally must continue.