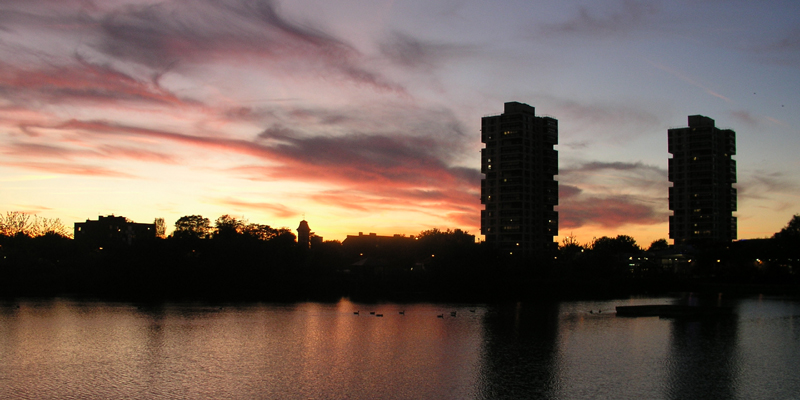 今日はめずらしく最高にいい天気でした。街中がうきうきしすぎて空回り渋滞してた。
フィールドワークの帰りスーパーからでてきたら空が真っ赤。
あわててカナダウォーターの名前にもなってる駅前の水辺まで走っていって撮った一枚。
ちなみに、カナダウォーターの名前の由来は、
かつては、カナダの船が近くの埠頭に来てたからだそうです。
> Canada Water is a body of water and wildlife refuge in Rotherhithe
> in the Docklands in south-east London. Canada Water tube
> station can be found here, as well as the Surrey Quays Shopping Centre.
> The surrounding area is sometimes also known as Canada Water.
> The lake is named after the former Canada Dock which was located on this site,
> and which was mainly used by ships from Canada.
> As with much of the Docklands, the Surrey Commercial Docks closed in the 1970s,
> leaving the area to decay over the next decade. During the 1980s,
> the London Docklands Development Corporation took over,
> and invested heavily in the redevelopment of Canada Water
> and the surrounding area. About half of Canada Dock was infilled
> and the Surrey Quays Shopping Centre built on top of it;
> the remainder was converted into a wildlife refuge.
> A canal remains linking Canada Water with Surrey Water.
参考：Canada Water – Wikipedia [Link]